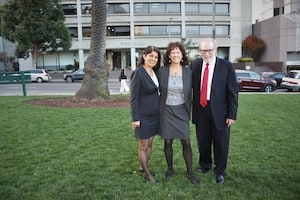 California’s Fair Employment & Housing Act prohibits discrimination against lesbian, gay, bisexual and transgender employees. The Act itself specifically prohibits discrimination against employees based upon their sex or sexual orientation. The Act further describes sex as including, “identity, appearance or behavior, whether or not that identity, appearance or behavior is different from that traditionally associated with the individual’s sex at birth.”

As with other claims of discrimination, a claim of discrimination based on sexual orientation or gender identity can be proven by direct or circumstantial evidence. This includes derogatory statements demonstrating bias against an individual or class of individuals based upon their sexual orientation or gender identity. It also includes evidence that an employer, for example, favored non-LGBT employees over LGBT employees in termination decisions.

Siegel LeWitter Malkani is proud to represent gay, lesbian, bisexual and transgender employees in their struggle to win equality in the workplace. Some of our cases include:

If you believe Siegel LeWitter Malkani could provide assistance to you regarding your potential case for sexual orientation discrimination, please contact the firm.